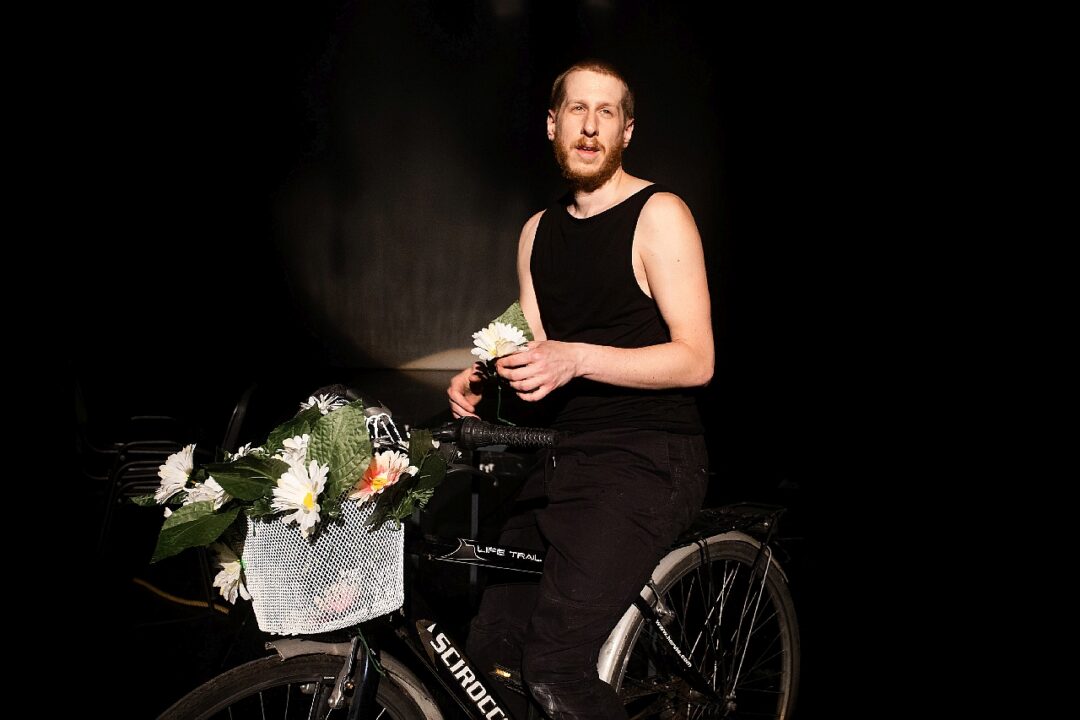 Brina Klampfer / Peter Frankl: For the Health of the Nation

Since you’ve been diligently washing your hands for the last few months, diligently disinfecting them, diligently wearing gloves one day and diligently not wearing them the next, diligently getting better and diligently dying, diligently cycling and taking flowers for a walk, diligently working and have been generally even more diligent every day, we, the artists, will also responsibly and diligently follow the recommendations of the government and create a fun monodrama, the kind that a diligent citizen longs for now that he can return to the theatre. We will diligently improvise and amaze from sentence to sentence. Amaze you and amaze ourselves. But we will soon get used to this amazement. You, the audience, and we, the creators. Give the impression that we are not in control, that we don’t know what we are doing (since we really don’t!), and will not know anything in general. And what next? How, in what way, and above all, what will we be for after that?

We seem to be living in a time when comedy and satire can proclaim they have been overcome by reality. It’s hard to be more ridiculous than reality that is becoming the greatest absurdity of the absurdity itself. The improvisations we are playing to comply with the new regulations, government outbursts, our own feelings, have flooded our everyday lives and become the new normal.

Improviser Peter Frankl and his friends will put on a fun monodrama for all those of you who missed theatre and are returning to it eager to have fun.

Brina Klampfer is a graduate of the Master’s degree at the Academy of Theater, Radio, Film and Television (AGRFT), a Master of Comparative Literature, and the head of The Festival of Drama Writing Vzkrik. So far, she has directed 5boys.com, Others, and A Slim Student at the Glej Theatre, the latter won two awards at the Visions Festival 2016. This year she is creating her Master’s production Paloma, coproduced by the Mladinsko Theatre, for which she is the author of the text and director of the play. She also works as a playwright, mostly in collaboration with director Tin Grabnar (Bloody Smokers, Tartuffe, The Lady from the Sea, Martin Krpan, Old People). She initiated several independent projects as part of KUD Krik Association, of which she is the president. Her projects are mostly move on the borderline between the dramatic, the performative, and the physical. She spends most of her time working with Simona Semenič, and her mentors at AGRFT are Tomi Janežič and Janez Janša.

Peter Frankl makes a living as an actor and teacher of theatrical improvisation. He is one of the founders of IGLU – Improvisational Theater of Ljubljana, which has its regular programme at Menza pri Koritu and Siti Teater BTC. He currently teaches at the IGLU School of Theater Improvisation, and has also been teaching at the School Impro League and at festivals throughout Europe and North America. He is a member of international improvisational network Ohana, participatory theatre duo Human Calculator, intermedia improvisational project Laser Beasts, street performing group Trio Šardone and Smrt Boga in Otrok (“Death of God and Children”) collective. He is also an actor in the tv show Osvežilna fronta ("Refreshing Front") and the artistic director of “Improvision”. He directed his theatrical debut Stoli (“Chairs”) at the Španski borci Cultural Centre, and participated as a dancer in performances of the Glej Theatre, AGRFT, Emanat, and Anton Bruckner University in Linz.

Organised by: EMANAT
In collaboration with: Bunker

“For the Health of the Nation moves continuously between pure realpolitik surfaces and the depths indicated in the symptoms. It seems more compelling in the latter. (...) If the performance gives the impression of incompleteness, this same incompleteness is its biggest potential. From the amorphous mass of motives, references, emotions and comments, to extract elements that can lead to radical political theater.”
- Muanis Sinanović, Kriterij

“Brina Klampfer's play For the Health of the Nation (...) pursues the theme of social change and relates to the most recent social and political period, which brought many real changes to the period of corona crisis and mores specifically, to the attitude towards art and culture within and after it. It is based on a note by MP Romana Tomc, who dismisses critical art production as parasitic and calls for public support for show business culture (she names the Modrijani ensemble as an example) as a sector that offers relevant content. ”
- Anja Radaljac, Delo

“When a theatrical actor becomes a comedian, singer, politician, he discards the idea of the inaccessibility of the viewer, thus “tearing down” the fourth wall. Peter Frankl’s personal connection and constant communication with the viewers and simultaneously with his colleague Vid Merlak, who took care of the video and music, made the show more accessible and turn the criticism of the political right into a mocking ridicule.”
- Ema Zevnik, Kriterij 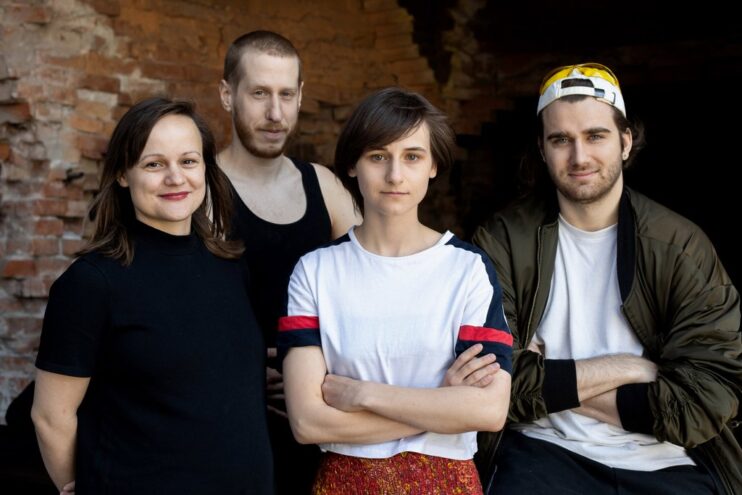 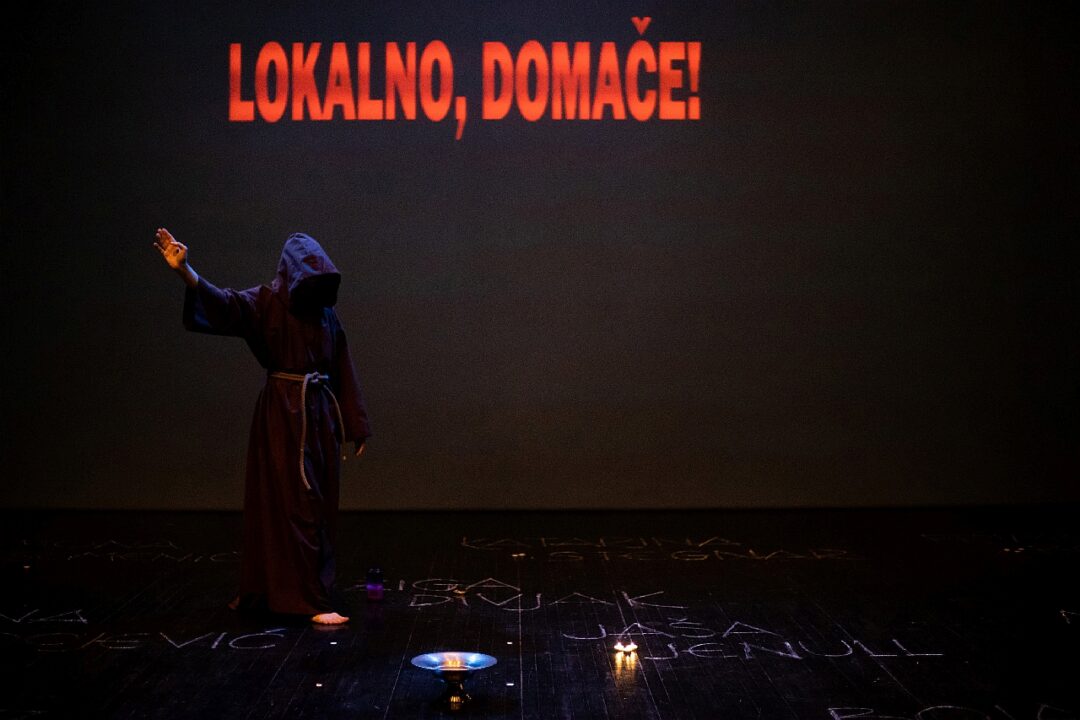 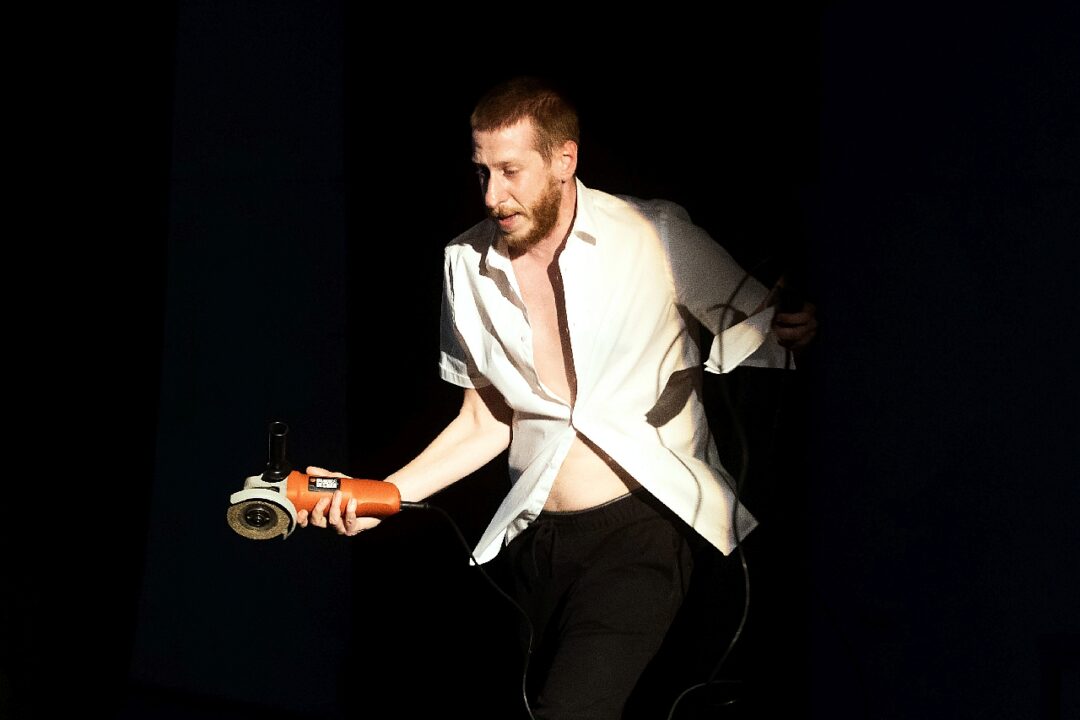 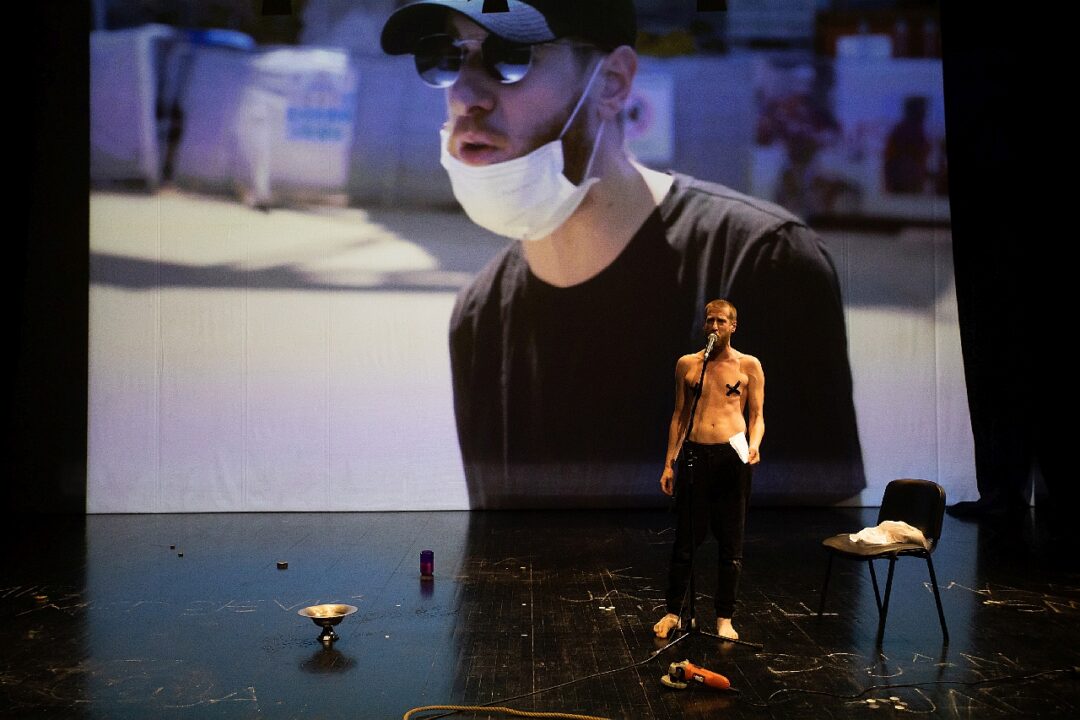 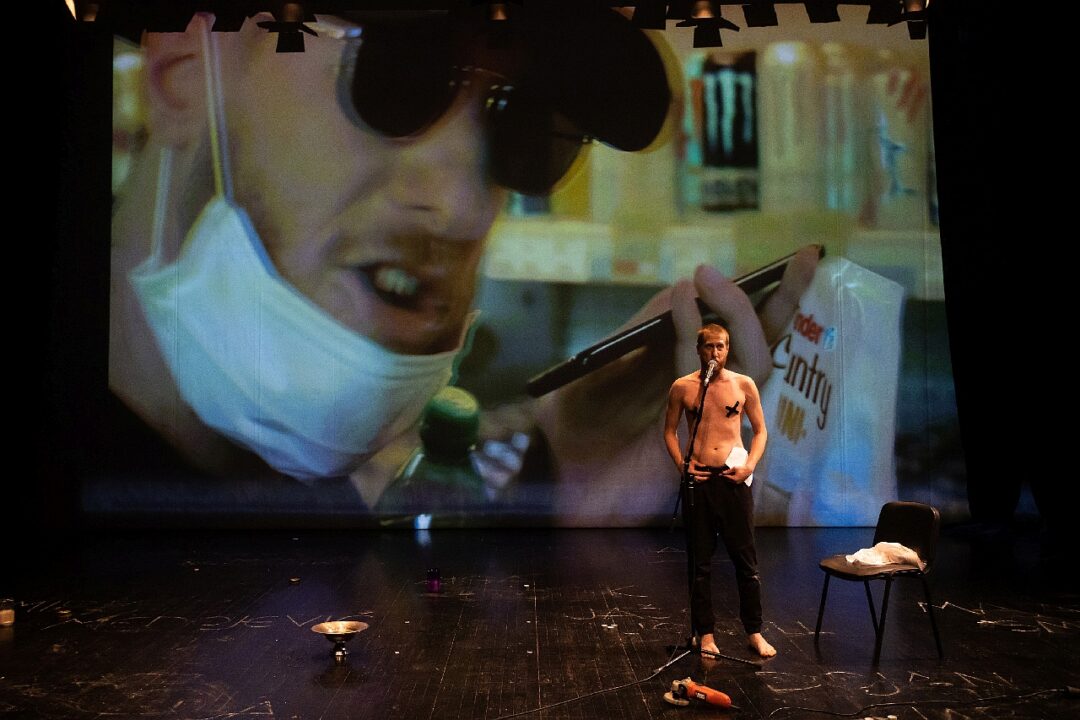 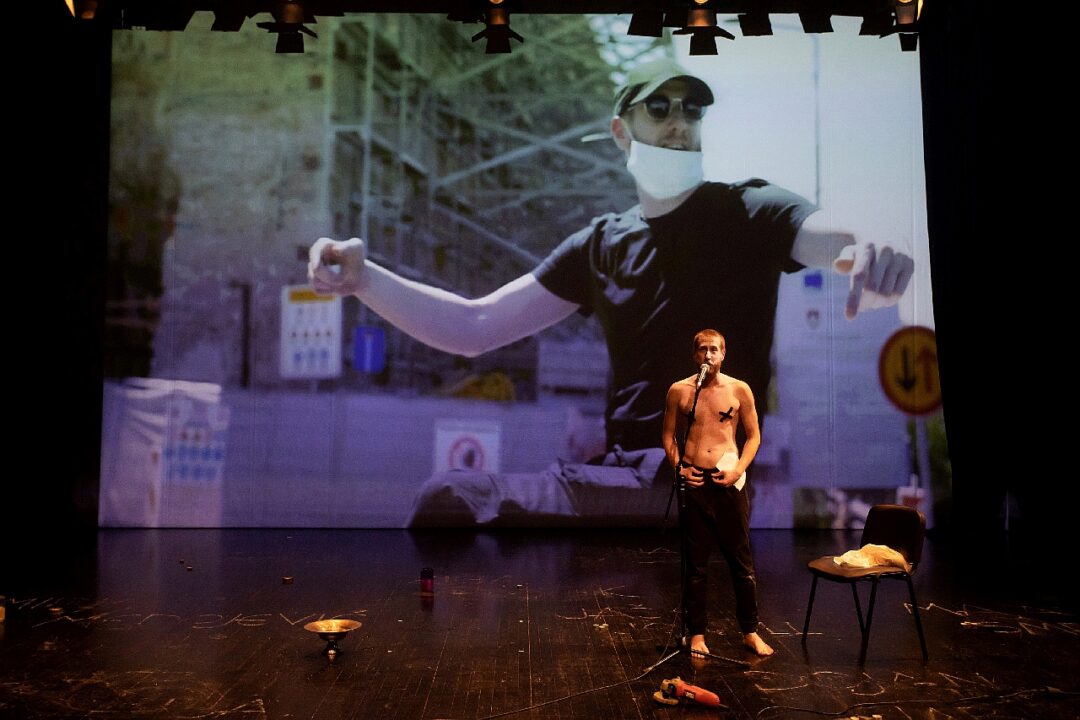 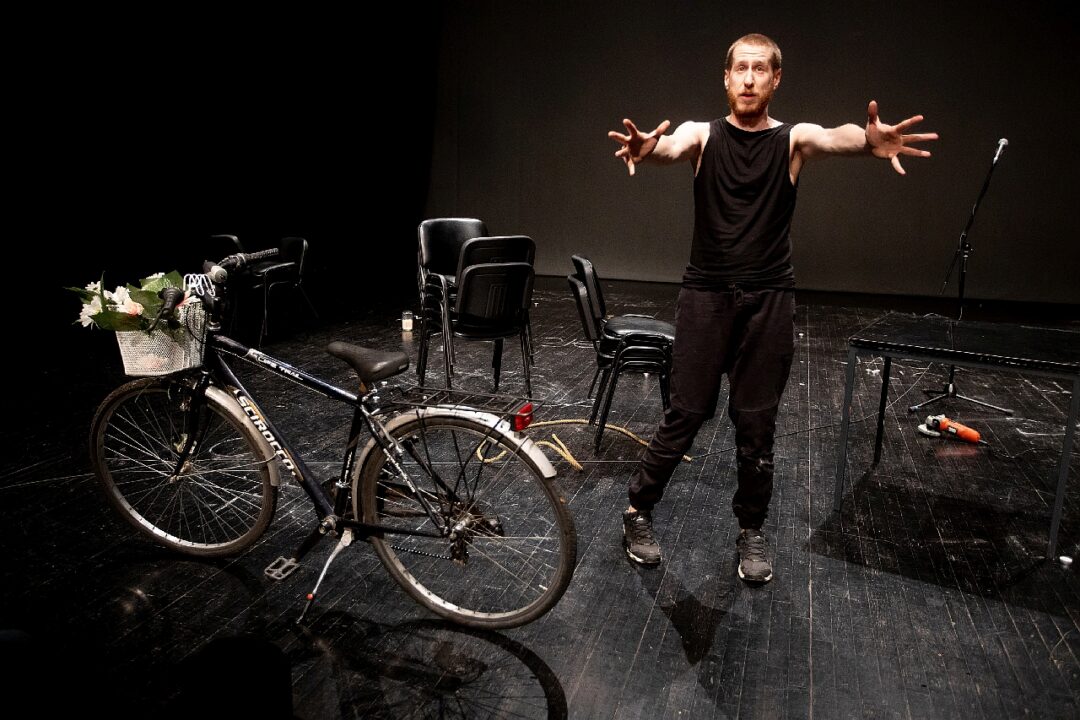 Brina Klampfer / Peter Frankl: For the Health of the Nation